A few weeks ago my high school friends kidnapped me one early morning to check out the Dapitan Arcade. It was my friend Mercy who planned the escapade. I had never heard of the place, but she said there was a lot of Christmas stuff I could get at really cheap prices. She also mentioned that some of the photos from doing a Google search showed that bauls were also available at the place. 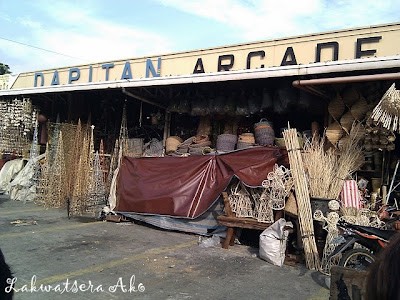 I had just moved in to a new home and need some storage boxes for my bags, linen and towels, so the prospect of buying a baul excited me. So off we went one early morning. We arrived at Dapitan Arcade at around 8 in the morning. Most of the stalls were still closed, but they opened one after another. There was indeed a lot of Christmas decors available, as well as ceramics and bauls! 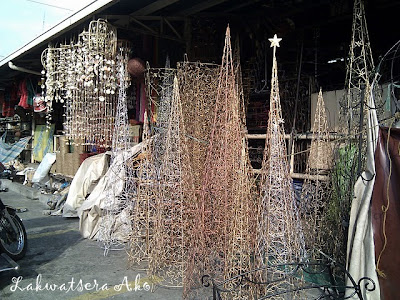 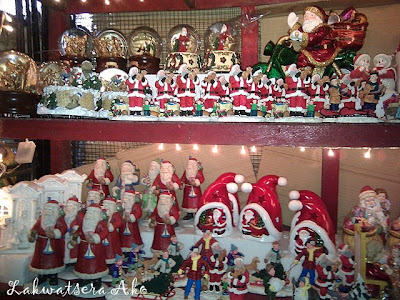 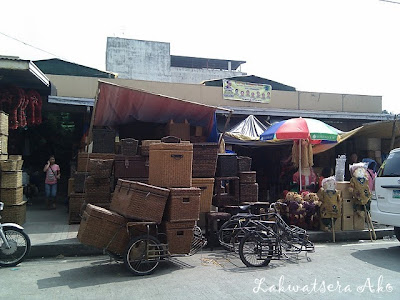 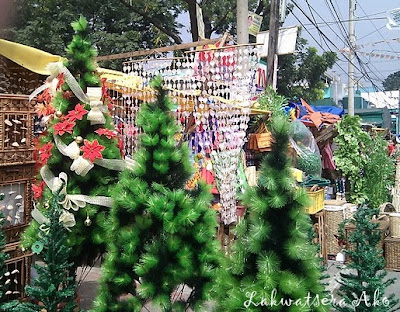 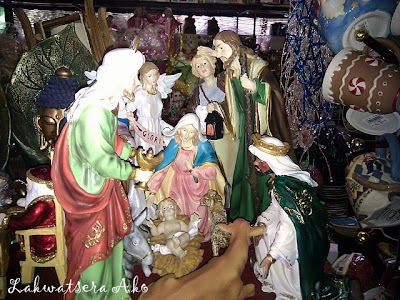 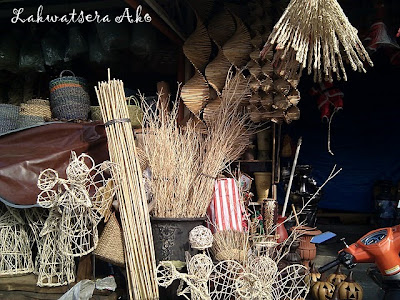 My hoard consisted of some Christmas decors -- a Santa Claus candle holder and chimes, paper plate holder made of basket material (I forgot what it is called), and a baul set (3 boxes!). I spent less than one thousand pesos for the stuff I bought -- PhP600 for the set of 3 baul (tawad from PhP750!). I wanted to purchase a couple of ceramic houseware, but realized I had no space for them at home. My friends got some Christmas decors, bags, ceramics and a baul. We just stayed until ten in the morning since it got quite warm already and then had breakfast at Burger King around the corner.

All in all, I had a great time at the Dapitan Arcade. The prices were really affordable and the store keepers were nice and accommodating (unlike in Divi!). Next time I think I'll get more storage boxes (take note though I had to put lining in it by myself) and some ceramic houseware -- a cookie jar maybe! =)

Thank you Mercy and Chare (and Chare's tita) for the fabulously fun day! 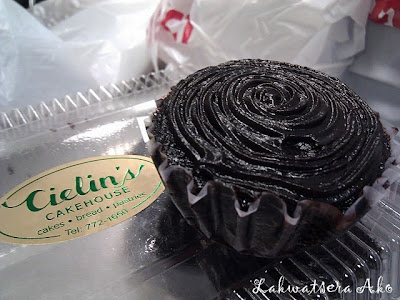 This cupcake beckoned me to buy it when I saw it displayed at Shell Select Magallanes. My allergy for chocolate has become selective and I was confident I wouldn't experience any with this cupcake... so I got a half-dozen.

My hunch was correct! The cupcake was rich, not too sweet and soft. I devoured two on the way home. It's just like Tita Cuc's famous chocolate cupcakes! (I have yet to convince her to give me the recipe).

It was Jay who introduced me to the wonderful, yummy world of ravioli eating! I had my doubts, but when we finally found the location of Bistro Ravioli at SM Mall of Asia we dropped other plans and immediately dined in. 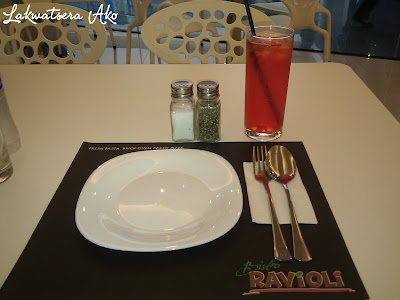 Bistro Ravioli offers fresh pasta, brick over baked pizza and ravioli (no rice dishes at all). You can also watch their chef prepare your food by the resto window. I was transfixed watching the pizza being swirled by the chef. We've eaten at bistro ravioli several times and here's some stuff we tried: 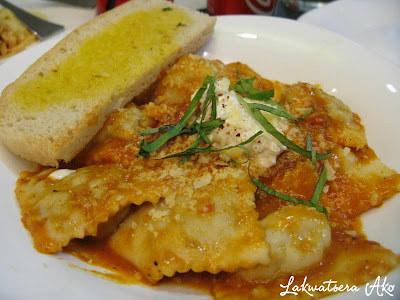 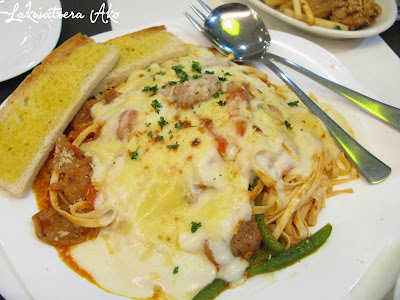 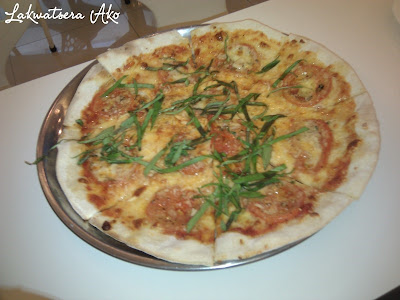 Margherita Pizza (PhP250)
All the dishes we tried were sumptuous and filling and you can share most of it. They also have family sizes. We haven't tried the pesto dishes, I heard that it's one of the most ordered from their menu.
Bistro Ravioli
SM Mall of Asia
(2nd floor near the middle entrance, department store side)
Price Range: approx. PhP300/head (with drinks)
Must have: ravioli (of course), I love their pizza too!
Lakwatsera's Rating: we've tagged it as one of our favorite restos at the SM Mall of Asia
Ipinaskil ni Aileen Apolo-de Jesus sa 2:51 AM 2 comments:

I only found out that most of the sardine brands can their products in Zamboanga. I don't remember the exact number (was it 11 or 17), but most of the popular brands according to Mayor Celso Lobregat work with the local canning factories. Wow!

And I was mighty surprised to see Spanish sardines being sold at the airport and hotel shop. Here's one I bought for my husband who I noticed loves Spanish sardines (I also got one for my Dad who loves it too): 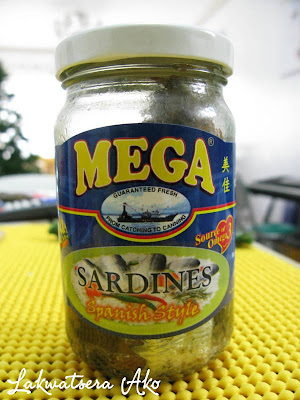 Aside from the usual durian candy etc. I noticed a unique pasalubong find at the airport -- the Lokot-Lokot. I tried to ask more info about it from the store, but the clerk just said, "Lokot-lokot". Okay, so it's made of rice, flour, oil, sugar and water. Juned and I tried one stick at the airport and after one bite he said, "Bagay `to for ice cream!". It's true. When I got home, the boys and I tried it out, and it's as perfect as eating ice cream with barquillos. 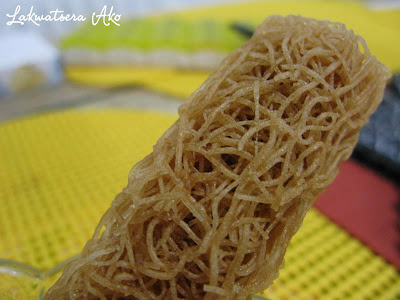 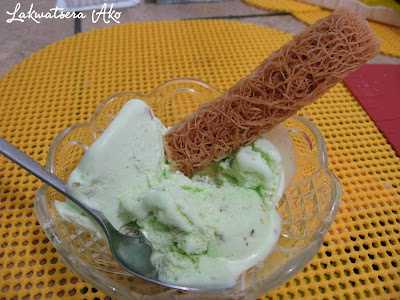 The structure of Fort Pilar looked a lot like Fort San Pedro in Cebu. For Pilar was built in 1635 during the Spanish era. Alongside the fort is the outdoor shrine of Our Lady of Pilar. A statue of Our Lady of Pilar was added in 1734. My friends shared that in September 21, 1897, an apparition of Our Lady of Pilar was seen  standing over the Basilan Strait commanding waves to stop its rush towards Zamboanga, stopping a tsunami from ruining the city. Arnel told me that they believed that she was miraculous and many devout Catholics come to pray at the shrine. 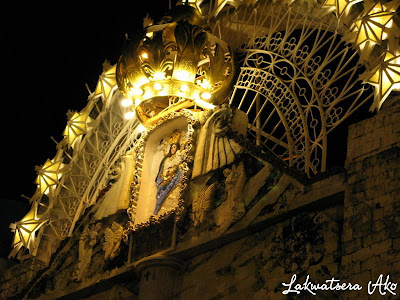 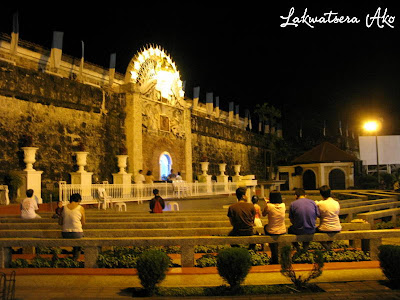 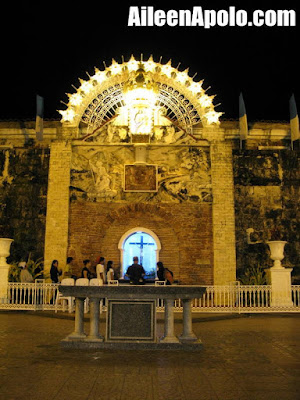 This is the area where you light your candles. There is a prayer by the cross which you can use to make your requests. Light the candles after praying. Locals usually bring the smoke from the candles close to the body part they requested for healing. 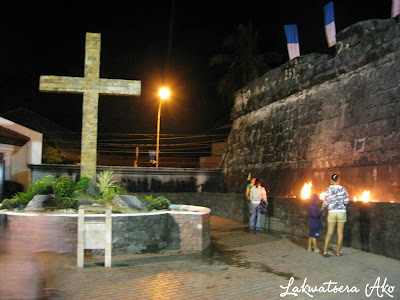 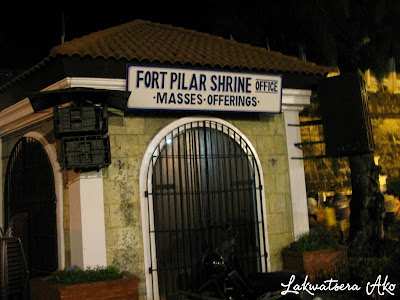 Tip: buy candles at the pasalubong center across the street

I have not been to Iligan, but have definitely tasted their super yummy peanuts! I know you can buy them now at Market, Market, but I used to get them at airports in Mindanao. This time around a true-blue Iligan native gave me one during the 4th Mindanao Bloggers Summit! Lucky me!!! 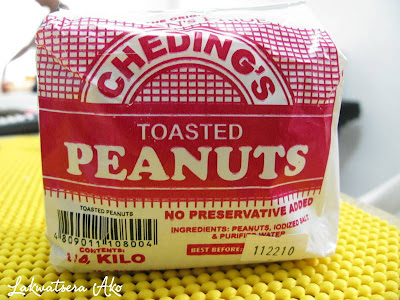 Many, many thanks Ate for the peanuts!
Ipinaskil ni Aileen Apolo-de Jesus sa 2:08 PM 3 comments:

I had very limited time to go around during my first visit to Zamboanga, but I'm happy to share that I managed to get around by backriding on Arnel's motorcyle! It was a short ride, but I got to see Plaza Rizal, the City Hall and  the perimeter of Fort Pilar. 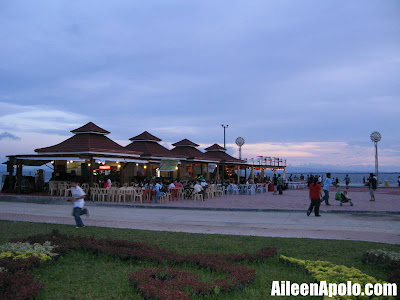 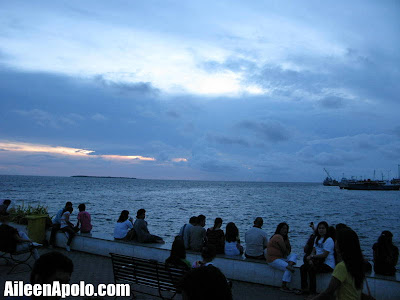 Paseo de Mar is Zamboanga's newest park -- a really huge park by the Zamboanga Peninsula and you can see Basilan and Santa Cruz from there. Aside from the cool clean breeze I loved the fact that Paseo del Mar had a lot of restos. I was famished when we arrived so I got some pizza. It was very affordable at PhP35 and was as big as a paper plate. This is the pizza I had before it orbed to my stomach. 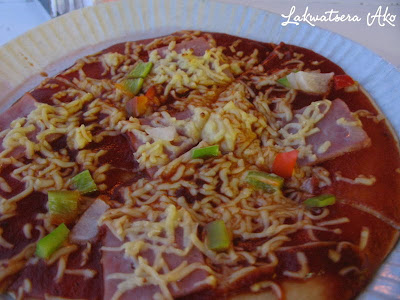 I was unable to try the yummy looking halo-halo with strawberry ice cream that my friends had, so I just ordered more food at Distrito. I was amazed at the humorous menu of Distrito. Here take a look - 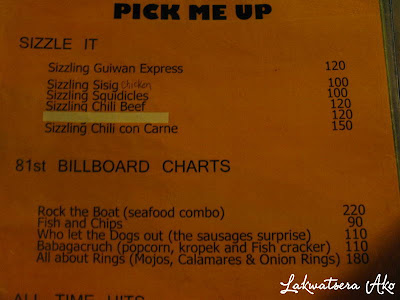 I got some bistek tagalog, kilawin, squid balls and ube quezo shake. Blogie and I ravished our main meal in seconds, but we had to wait awhile for the rest of our order. The kilawin burned my tongue, but was fresh. Good thing the ube quezo shake was delivered a few minutes later and that helped ease the pain (haha!). I loved the shake though. Here's a photo of the kilawin that would surely make you cry. 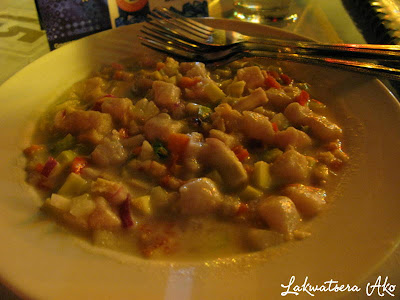 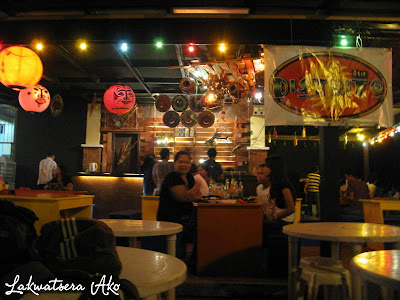 How to get there (assuming you're just visiting Zamboanga):
1. Take one of the many flights of either Philippine Airlines, Cebu Pacific Air or Airphil Express.
2. After you check-in a hotel hop on a tricycle (it's the main mode of transport in the city). It will just cost you PhP30.

How much to bring: PhP200 in Paseo del Mar will bring you a long way.
Ipinaskil ni Aileen Apolo-de Jesus sa 12:40 PM 4 comments: