I'm a South girl and that means I don't go to Quezon City that much. I'm lost once I cross Robinson's Galleria. I think I could get around Cebu City better than QC. LOL.

So, last night when Sweetie and I were deciding where to go after attending an album launch, I was basically useless in suggesting places to go to and he surprised me by bringing me to a "chocolate cafe" located near ABS-CBN and alongside Esquinita.

Cafea is a quaint little place. Lighting was a bit dim (very roh-mhan-thic!) and the tables were marble inlaid furniture (which I suspect was one of my Mom's projects when we were manufacturing those types of stuff). And since it was a weeknight the place was almost deserted. 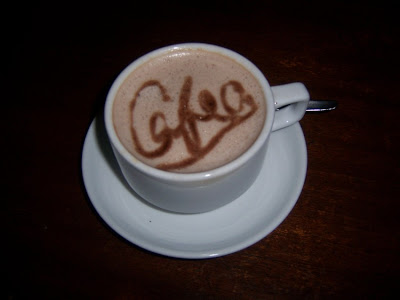 It was quite difficult to choose what to drink. The menu had loads of choices for hot and cold drinks. I wanted to try the hot chocolate mint drink, but it was unavailable so I had a tall cookies and cream shake instead. It was so sinful because it had ice cream, candy sprinkles and a champola. Of course, Sweetie had to finish it for me (that's just my little ploy to make him gain weight). Hihihi. 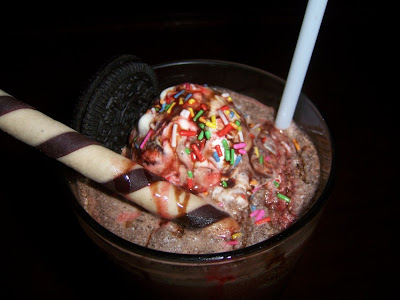 But, I'll surely go back to try out all the other drinks!
Ipinaskil ni Aileen Apolo-de Jesus sa 10:23 PM 3 comments: