Getting a Haircut in Japan 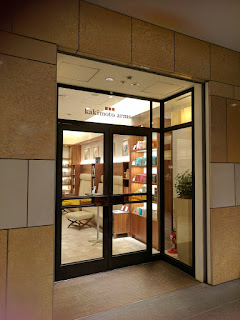 The universe conspired early this week. I managed to get off work just before six and hubby was lost somewhere in Nakano. I took the chance and marched into Kakimoto Arms in Ropponggi to check if there was an available hairstylist. I've been eyeing the salon for more than a year now. It's probably the most expensive haircut I would have in my entire life, but I figured that the hairstylist would hopefully not butcher my hair. I was very nervous.

The salon was very interesting. They had lockers where you could keep your things. They offered a case to keep my eyeglasses in. And they gave me a tiny ziplock bag for my earrings. Never had any of these in my home country. They also had beverage available in case you got thirsty. 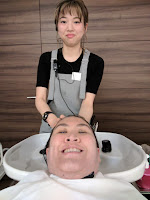 The hairstylist sat me down in front of a mirror to interview me first on what I wanted to do with my hair. I told him I just wanted it short. A new look I said since I've had my hair long for about 15 years now. He didn't want to cut it short at first, but he took heed when I said I'm bored with my look.

I then moved to get my hair shampooed. The staff was very nice and made sure I was comfortable.

When Kamohara-san started to cut my hair I whispered to him that I wanted to get bangs. He wasn't convinced I should have bangs and just said, "I'll think about it." As he finished cutting the back area he asked me if I was sure I wanted bangs. I said, "Yes I want to try". He probably thought I'd hate it so cut sample bangs first and then when I said it's fine and proceeded to finish it. 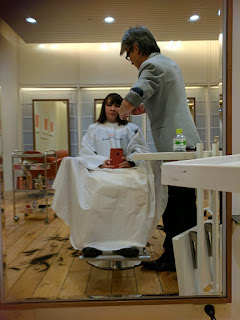 I've always been wary about going to the salon. My long-time hairstylist retired a few years ago and I have not found the "right one" since he left so my hair has been subjected to a wide array of heavy-handed hairstylists. I just go whenever my hair is already too long and need a haircut. I even do home hair spa just to spare me from going to the salon. Kamohara-san though has the gentlest, expert hands and I think I may have found the right hair sylist for me. So I have to think about how to make this manageable for me (and my pocket). 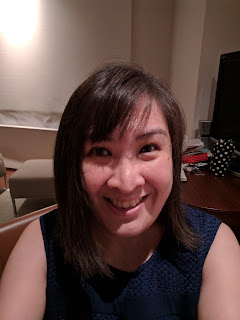 I honestly wasn't sure if I did the right thing since it took long to finalize and blow-dry my hair. Midway I snapped a photo and sent it to my friend Chelle to get an affirmation I was doing the right thing. She said it looked good and that I shouldn't worry. Eventually Kazuro-san finished and I went back to the hotel to wait for the hubby.

I did not tell hubby that I was getting a hair cut. I wanted to surprise him. He was really surprised to see my new look and has been very fond of my bangs (haha). It's been a few days since I had my haircut and I finally figured out how to properly blow-dry it (had a punk look the first time I blow dried it haha).

Getting a haircut in Japan was a big, risky adventure for me. I'm glad I took the risk since my family loves my new look and friends have been raving how my hair suits me.